A look at Canada’s international trade through maps and charts 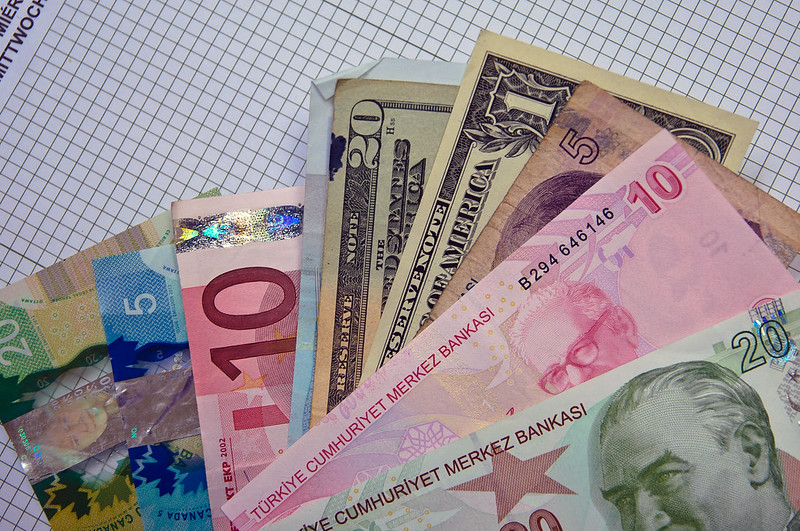 Canada has trade relations with 224 countries and territories, with which it trades more than 5,500 types of products and services. In 2014, Canada imported $511 billion in goods, and exported $525 billion, according to data from Statistics Canada.

But who are our main trading partners, and what kind of goods flow back and forth between us? The data I got from StatCan (get the data here) answers some of those questions. It details the amount and value of every product imported to and exported from Canada, for every trading partner, since 2009.

Let’s first see the big picture. The map below illustrates these relations with 180 countries (those big enough to be visible on a map). Use the buttons to switch between imports and exports, and to visualize either the average annual trade for each country, or the most traded product by value.

Note: The product names on the map follow the HS6 (Harmonized System) convention of the Word Customs Organization. These many contain acronyms like “adpm” (automatic data processing machine – a computer), and “nes” (not elsewhere specified). For a full glossary of terms, consult Industry Canada.

Hover/tap over each country for details.

We all know that the United States is Canada’s main trading partner. It shows on the map; it’s one of the darkest shaded countries, along with China. What the map doesn’t show is just how big a trading partner it is. Shades of blue aren’t very good at conveying values.

The interactive chart below, showing the change in trade since 2009 with  Canada’s top 20 trading partners, fixes this. Use the filter above the chart to include and exclude the US.

Why did the U.K. go from second to third biggest importer of Canadian goods in the last few years? Gold, mainly. Gold is the top Canadian export to the Commonwealth motherland, and it dropped from $11.7 billion to $7.6 billion between 2012 and 2013. 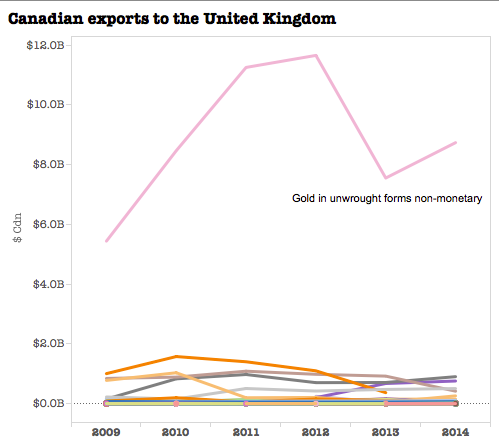 Other top exports to the UK include diamonds, nickel, and uranium.

Canada imports from itself?

A spokesperson for Statistics Canada explains that these are re-imports.

“These are goods, materials or articles that are imported in either the same condition in which they were exported or after undergoing repair or minor alterations (e.g., blending, packaging, bottling, cleaning or sorting) that leave them essentially unchanged,” Isabelle Raymond from StatCan told me.

The most re-imported goods, according to the data, are containers, aircraft parts, aircrafts, and engine parts.

The top-traded products for each country

And what goods are being traded the most with our partners? Explore this in the chart below. You can filter by country for each one.

If you look at the top imported and exported products overall, the same four goods occupy the top four spots on both lists: crude oil, two classes of vehicles, and unwrought non-monetary gold.

Just as Canada exports Canadian-made cars, it also imports a bunch: cars are the top imports from Japan, Korea, and Germany.

Peru and Argentina are the top gold-exporting countries to Canada, while the U.K and the US are top buyers from Canada.

Although Canada has diverse trade relations with most countries, there are a few where a single product dominates most of the trade.

These are the countries for which the top-imported product represents 99% or more of all imports, by value.

Do you have any question about the data? Any bits worth looking into? Leave your thoughts in the comments.

Want to explore the data yourself? Download it here.